Helping Girls Stay in the Game 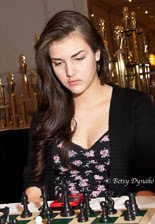 Alexandra Botez recently won the All Girls National Chess Championship in Chicago
We at Hipsters for Sisters are honored to support to the National All-Girls Chess Tournament for the second year in a row. In pursuit of our mission to help empower and liberate women, we are once again donating three of our belt bags as prizes for the First, Second and Third Place Finishers in the All-Girls National Chess Championships. We are delighted to support this annual tournament that is designed to foster the intellectual empowerment of young women through chess.
“It's not about Kings, Queens, and Rooks, but rather, quadrants and coordinates, thinking strategically and foreseeing consequences. It's about lines and angles, weighing options and making decisions,” writes Wendi Fischer, the Scholastic Director of America's Foundation for Chess. “It might just be the perfect teaching and learning tool.”
Research clearly shows there is a strong correlation between learning to play chess and academic achievement. Numerous studies have clearly proven that students who received chess instruction scored significantly higher on all measures of academic achievement, including math, spatial analysis, and non-verbal reasoning ability.  It teaches higher level thinking skills such as the ability to visualize, analyze, and think critically. Sadly, girls are not taking advantage of this learning opportunity.
According to Ruth Haring, president of the U.S. Chess Federation, chess teaches you how to evaluate a complex situation and make a decision. "That's a skill that is not easy to learn and it carries over to other parts of your life." Based on these studies, many school across the country are clamoring to get chess incorporated into the classroom or at least offer after-school programs to take advantage of this “ perfect teaching and learning tool.”
But why are so many girls missing out? Would it surprise you to learn that girls make up less than 3 percent of the tournament community? This means fewer of them are competing for scholarships, fewer are eligible to play at the world-class level and fewer are training in the analytical skills the sport is grounded in, said Ruth Haring, president of the U.S. Chess Federation.

The reasons girls stray from chess are many, Haring said. “For those who learn to play as youngsters, they may leave because the activity is male-dominated and not considered cool, she said. When girls go to tournaments and meet-ups, they have no one to talk to and no one they feel a connection with, she said.”

"If we could make chess a cool thing for girls to do … we could also solve the problem of why we don't have more female engineers, or more females in math and sciences," Haring said. "It's something we have to address so that girls can have some role models — and that's what this type (The National All-Girls) of tournament will create.”

"Sometimes girls simply shy away from chess because it pits them one-on-one against boys, whose attention and favor they are trying to capture, said Robert McLellan, the executive producer of "Brooklyn Castle," a documentary about one school's immersion in the sport.

"Girls are taught early not to beat boys," he said. "They will sometimes throw games and lose on purpose. Men don't view (competition) the same way."

"Sometimes it's hard because when you play against boys, they think it's going to be a real easy game," reveals Shayna Provine, age 13, from Naperville, Il.  "Some boys, when I start beating them, they get kind of angry and slam their pieces down, or hit the clock real hard. I just stay calm the whole time. I focus on the game and try to stay composed no matter what."

We at Hipsters for Sisters believe that chess symbolizes intellectual achievement in a male-dominated arena. Part of our mission is to level the playing field in terms of women’s self image, self-esteem and intellectual development. The National All Girls Tournament helps deliver on that mission. As we grow as a company, we hope to eventually sponsor a scholarship paying the way to the FIDE World Youth Championship for the winner of this event. We would love to do whatever we can to help girls “stay in the game.”

For more more information of the benefits of chess, check out the following sites:
www.rknights.org
www.kasparovchessfoundation.org
www.uschess.org