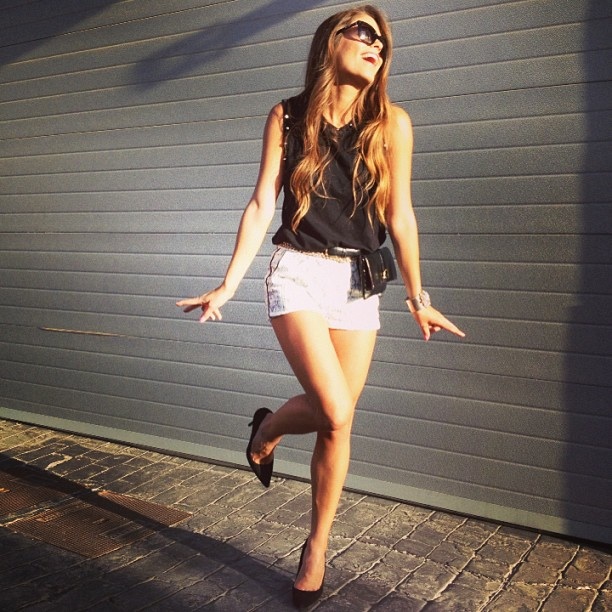 Photo: Blogger Jessie Chanes of Seams for a Desire with the Black Flat Belt Bag

Recently, at dinner with my boyfriend and some female friends, I announced, somewhat dramatically, that I’d begun phasing out bags. Yes, I told the table, lately, more often than not, I just tuck my phone, card, and keys into my pocket and go forth into the night (or day) with my shoulders and arms completely free of the detritus that so many women lug around on a daily basis.

It was true — just last week I had jokingly spun around on the sidewalk exclaiming how freeee I felt to be walking to the grocery store without a three-pound gnat buzzing in my ear. Recently, that’s all a bag has been to me: a thing that’s vaguely irritated me for so long I actually forgot I could swat it away.

A brief history for those who have not ventured down this particular sartorial wormhole: Initially, purses were something that both men and women carried. That is, until something resembling a pocket was invented. Men took this as their cue to make a transition. Women, as mysterious and complex as we’ve ever been, opted to stick with bags. I don’t know why this happened. My best guesses are “makeup” or “baby stuff.” But from where I’m standing — with one shoulder ever-so slightly lower than the other, thanks to my years of toting — it looks as if the ladies missed out on a pretty significant opportunity to scale things down.

Why get rid of bags? you may be wondering. I like my bags! They’re pretty! I know that, to many, bags are important objects of style — often viewed as an opportunity to succinctly communicate to (let’s face it: other women) what you’re all about. A teenage version of myself once spent a lot of time strategizing ways to assemble a small army of the tiniest (i.e., most affordable) Louis Vuitton bags on the market — so I can say that at one point in my life I very much understood this appeal. But as an adult, my perspective on wearable social-signifiers is different, and my philosophy is more in line with the affection for minimalism that designers like Phoebe Philo have made their calling card.

My most significant issue with them is that they’re a physical hindrance, second only, in fashion, to heels. The bigger the bag, the more stuff I’ll pack into it. And that stuff weighs me down — makes my shoulders and neck ache, flips over and knocks me in the head when I drop something or bend down to retie my shoes. Plus, when I have a bunch of stuff crammed into a bag, it’s harder to find the thing I’m looking for. My mental image of a disorganized woman is just a lady feverishly rifling through her gigantic leather sack. I was joking when I spun around on the sidewalk that day, but I do seriously think that there’s a connection between agility and social confidence. Simplicity rules right now, and to me that means both sleeker stuff and less of it.

There are a few other reasons for my baglessness. One is that having a purse invites me to become a receptacle for other people’s stuff. Mainly the gender that opted out of carrying bags centuries ago. (“Do you mind if I hold onto the estimated $11,000 more your gender earns annually as well as your umbrella?” is a question I have been tempted to ask.)

I can also see that, as technology advances, we don’t need to bring as many physical items around with us. As a book-reviews editor, this can make me a little weepy, but then again, so does the cost of a chiropractor, David Foster Wallace. My point is, phasing out purses may end up being a natural side effect of the way we’re advancing anyway. And who doesn’t want to be the most modern girl?

I realize that the idea of not carrying a bag at all, ever, may seem impossible. (I can guess the challenges you’re thinking of, because I’ve had all of these thoughts, too: On pocketless days, where am I supposed to put my compact? My cell phone and keys? The straw wrapper that, for some reason, I tucked into my bag instead of throwing away? And the answer is, I don’t know. I realize that, like all breakups, this one is not going to be easy. But I think it’s worth the pain.