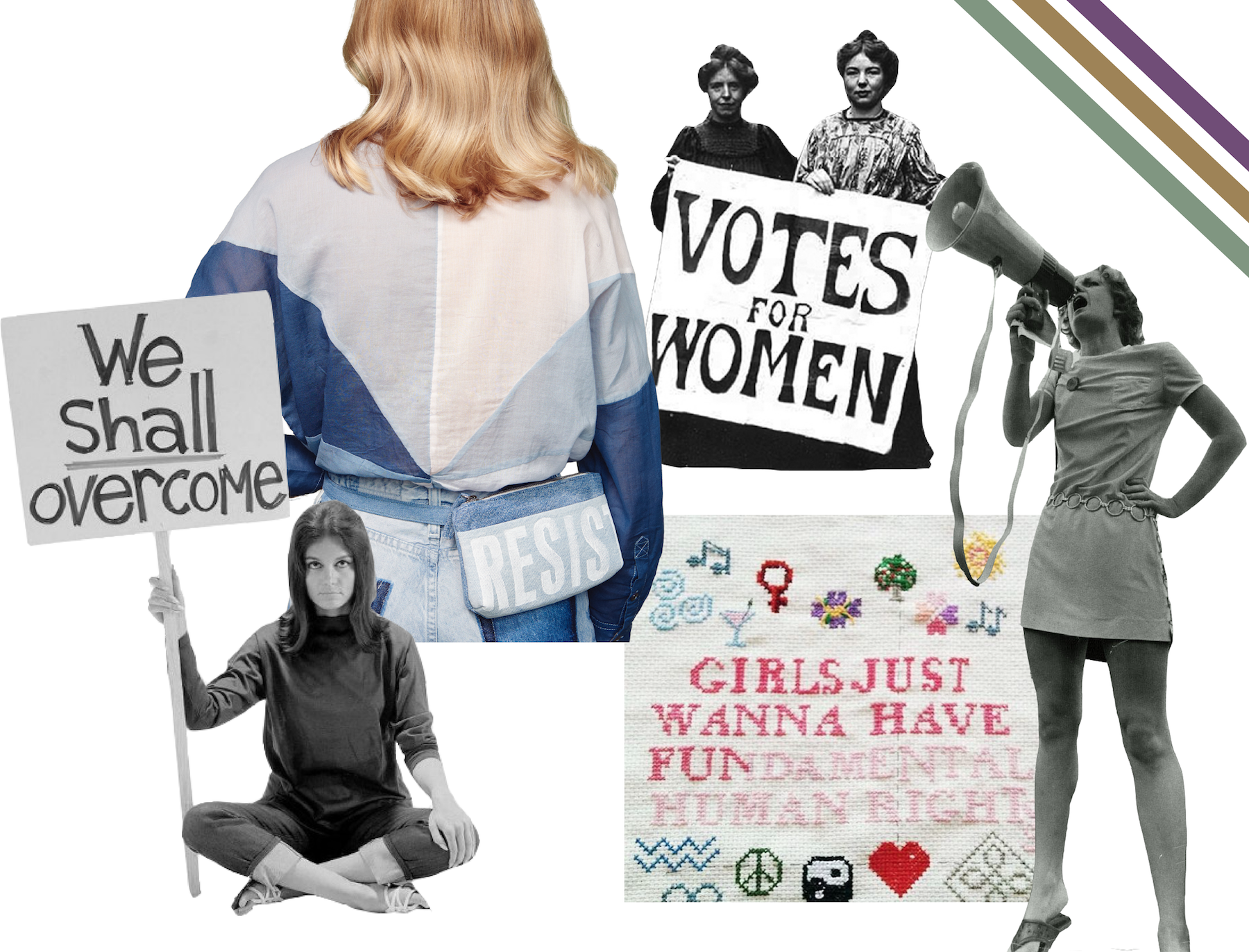 Back when we first started HFS, most people still viewed "feminism" as the second of three "F" words that one didn't say in polite company. You undoubtedly know the first, but may still be wondering about the third. In case you are, it's "fanny pack."  Rebels that we were, we incorporated two out of three into our company DNA. From our inception, it has been our mission to liberate women from their baggage, not only physically, but mentally and emotionally as well. Maybe what Magritte said is true, "sometimes a pipe is just a pipe," but more often than not, a purse is not just a purse. For many women, it symbolizes a container to hold their missing pieces: full rosy lips, flawless skin, perfect hair, manicured nails, odorless armpits...etc. Well, it's always been our motto that if a man can get through the day with only the contents of his pockets, so can we.
A mere, five short years later, and all three of these "F" words roll off the tongues of the most proper young women without a flinch. In fact, feminism has never been more popular of a word than it is now. Beyonce sang in front of it (2014 Music Video Awards), Alicia Keys renounced makeup in the name of it, and Jennifer Lawrence fought for it when she very publicly demanded pay equal to that of her male co-star. Feminism-- the belief that men and women should have equal rights and pay-- is something we, women, have fought for for centuries and are still in the process of working towards. If fashion is a means of personal expression, how have we, women, used it in the past to propel our movement forward in our hard-fought and centuries-long struggle for fundamental rights? Here's a look at how the various waves of the women's liberation movement has influenced women's fashion throughout history. 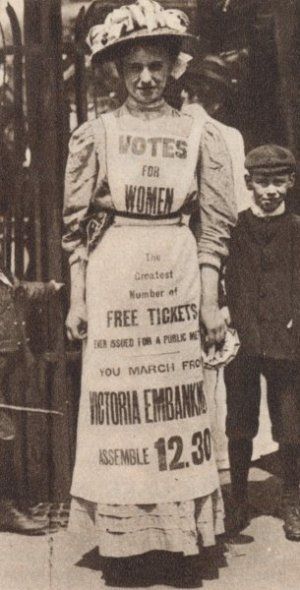 British suffragette Emily Wilding Davison
First, let's start with the suffragettes. The real trailblazers of the women's movement, the suffragettes wanted to be seen as more than just daughters, mothers, and housewives-- they wanted the same rights as men including the right to vote. In 1869, Susan B. Anthony and Elizabeth Cady Stanton founded the National Woman Suffrage Association, with the primary goal being achieving voting rights for women by means of a Congressional amendment to the Constitution. Instead of eschewing fashion in favor of intellect, the suffragettes sought to effect change by popularizing the women's movement though fashionable dressing.
"Haunted by the stereotypical image of the 'strong-minded woman' in masculine clothes, pebble-thick glasses and galoshes created by cartoonists, they [suffragettes] chose instead to present a fashionable, feminine image."
As it quickly became fashionable to rally for the right to vote, membership grew and the movement spread. White, a symbol of purity and virtue, was an official color for the women's movement and suffragettes were encouraged to wear white to marches in the early 1900s. Additional colors of the movement were green, gold, and purple, and members were encouraged to wear the colors in the form of a ribbon or badge "as a duty and a privilege." 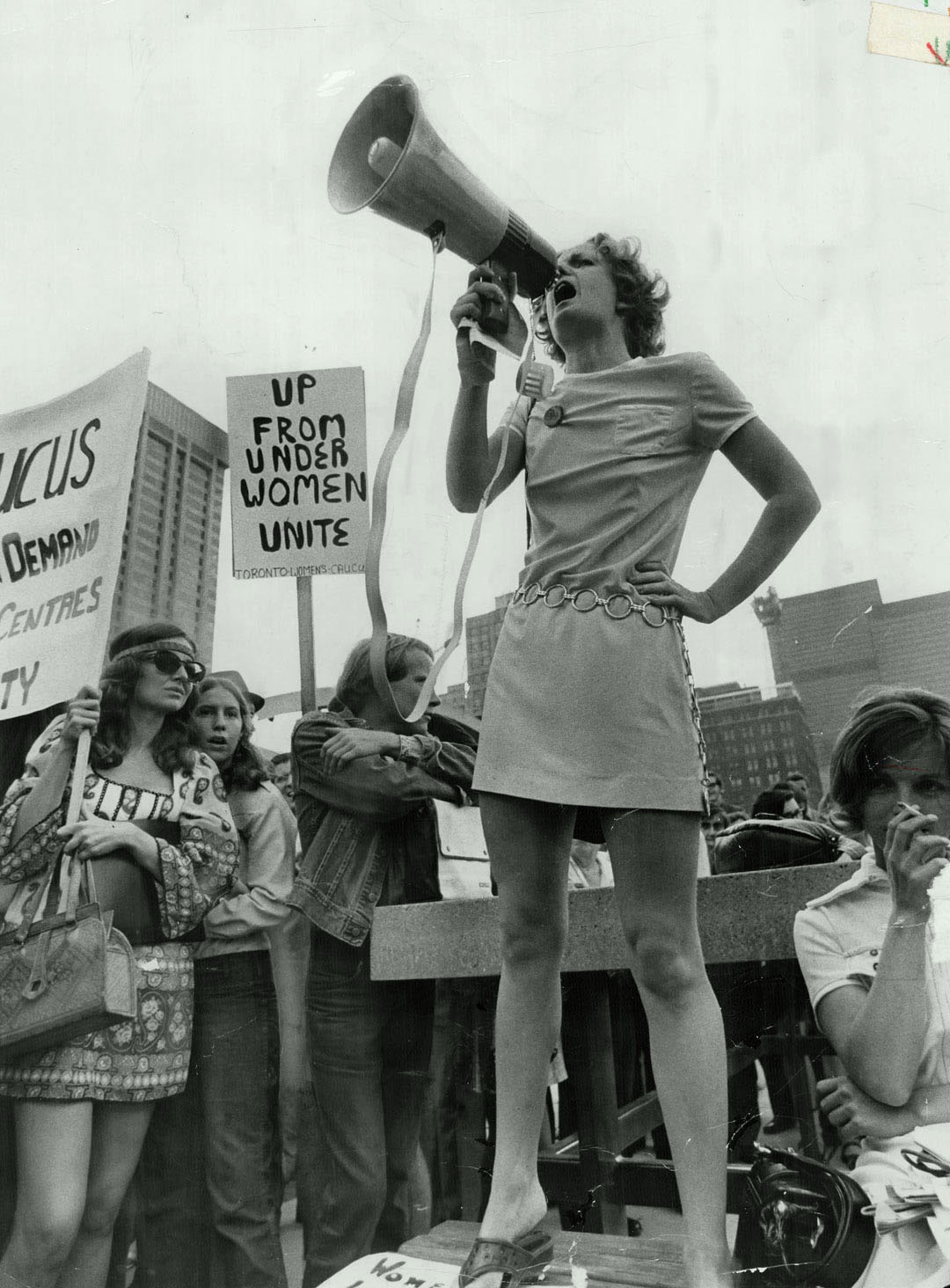 Women in the women's liberation movement in 1970. Source: Getty Images
After suffragettes attained their goal of the right to vote, the women's movement calmed down and women's role in society as caretakers and homemakers slowly solidified. It wasn't until the 1960's when women started to challenge these notions in a second wave of feminism. Second-wave feminism, initiated by Betty Friedman in her book, the Feminine Mystique, and later championed by Gloria Steinem, was about equality in the workplace, contraception, and women's role in the household.
While the leaders of second-wave feminism generally distanced themselves from fashion as a means for political revolution, women used it as an act of rebellion. Mini skirts and bikinis became fashionable, as they challenged the conservative notions of what women were expected to wear. Pantssuits also became popular, as did the notion of "bra-burning," which embodied the idea that women were escaping their restrictive clothing as a way to physically and socially liberate themselves.
A third-wave of feminism began in the 1990s and continues today. Where fashion didn't have that much of a grounding in second-wave feminism (at least not officially), fashion finds a home in this current wave now, as this time, feminism represents a celebration of all things feminine. "This [third] wave of feminism really tries to value typically feminine interests, like fashion, and so maybe women who felt less represented by the second wave now feel that they have more of a place in the feminist movement."

RESIST Fanny Pack by HFS
As the first female candidate to be nominated by a major political party for president, Hillary Clinton represented the apex of the women's liberation movement for many, as she brought hope of breaking the highest and final glass ceiling, the presidency. When Clinton wasn't elected, the response was the greatest unification of women ever in our history. The Women's March on Washington and it's 600 "sister marches" across the country brought over 4 million attendees collectively, representing one of the largest demonstrations in American history. In addition, the 2016 election resulted in the biggest influence on women's fashion since the 1960's. T-shirts reading "Future is Female," and "Nasty Woman" (words used by president Trump in reference to Clinton) became ubiquitous, as well as pink, cat-eared hats called "pussy hats" which adorned the heads of millions of marchers.
Now that the greatest momentum of the marches has subsided, we, women, must continue the conversation. Let's not wait for a fourth wave to achieve the basic human equality we deserve. Yes, it can be overwhelming, but let us not go quietly back into that complacent life. The choice is ours, now, more than ever. #RESIST