Turn Off the TV: How Media Gender Bias is Affecting Us All

Posted by DD on 7/9/2013 to Community
Share |
At HFS Collective, one of our central missions is to help empower women. As we see it, one of the biggest obstacles standing in our way is our own self-perception. From the day we are born, we are bombarded with messages from the media which subliminally cause us to feel that our worth is determined more by how we look than who we are or what we do. Worst and most damaging of all, is that we have been trained to subconsciously see ourselves as objects to be judged. We want to be pretty because we are told that is where our value lies. Then, just to make us really feel confused and insecure, we are given mixed messages: yes, legally, you can be anything you want, but the only examples we see valued on television or in the movies are women in supporting, sexualized roles. The media seems to make women choose: do you want success or do you want love? This is at the heart of the issue.

Over 50% of college graduates are women (and have been for the last twenty years) yet only 17% of Congress, Fortune 500 companies and entertainment professionals, such as writers, directors and producers are women. The ways we see (or more accurately don’t see) ourselves is at least partially to blame. While we are shown plenty of images of cute college co-eds, we rarely see images of happy women who are successful in professional, powerful careers. How would we have a clue how to do it or think that it is even possible? 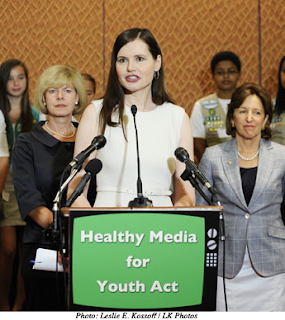 The Geena Davis Institute on Gender in Media seeks to assess and alter the representations of female characters in TV and film, with particular attention to programming for children ages 11 and under. According to founder and academy-award winning actress, Geena Davis, the worst segment of programming with regards to gender parity is TV shows aimed at viewers aged 7-11. In these shows, the disparity is almost 6-1.

In her June, 2013 speech to the Animation Guild Davis asked attendees, “What if by consuming these vast amounts of media that we do, increasingly so, that ratio of males to females of 6-to-1 looks normal? By continuing to make those films, we’re in effect saying that women and girls are less important than men and boys––that they don’t take up half the space in the world.” “The sexualization of female characters is rampant,” Davis continued. “In G-rated animated movies, female characters wore same amount of revealing clothing as the female characters in R-rated movies.” As a result, women are learning to self-sexualize by age 6, she said.

As an example of how strong depictions of women can affect change, Davis cited a survey conducted after the airing of “Commander in Chief,” in which she played a female president of the United States. Sixty-nine percent of those polled said that after watching the show, they were more likely to vote for a female president. As Davis put it, “if they can see it, they can be it.”

Images are incredibly powerful and can have an incredibly positive effect. They can create opportunities to overcome these unconscious biases and social barriers. For these reasons, we have chosen the Geena Davis Institute on Gender in Media to add to our list of “Organizations We Support.” Please join us in supporting this empowering organization.