All-girls contest encourages skill in 'the game of kings' 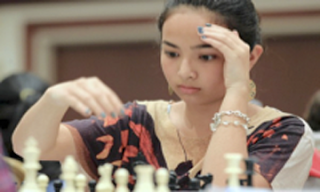 Often, when Caeley Harihara shows up to compete at chess tournaments, she looks around and notices she's the only girl in the room.

"When I was younger, there used to be a lot more girls at tournaments," the freshman at Walter Payton College Prep High School said. "But as I got older, girls started to leave chess."

But Caeley, 15, has become accustomed to being the only girl and she doesn't let that intimidate her, she said.

This weekend she will join more than 200 other young women at the All-Girls National Chess Championship in Chicago. The tournament encourages girls as young as 5 up to 18 to compete in a sport where they are often a rarity. And in each category it will be a young woman who takes home the prize.

The all-girls tournament comes at a time when nationally the game of chess has become a celebrated activity among students even as other extracurricular programs face budget cuts and downsizing. In recent years, Chicago Public Schools has increased its commitment to nurturing chess players and the sport is getting more attention in urban and poor communities.

Still, according to competition planners, girls make up less than 3 percent of the tournament community. That means fewer of them are competing for scholarship money, fewer are eligible to play at the world-class level and fewer are training in the analytical skills the sport is grounded in, said Ruth Haring, president of the U.S. Chess Federation.

"What chess does is teaches you how to evaluate a complex situation and make a decision," said Haring, who is only the second female to lead the organization in 73 years. "That's a skill that is not easy to learn and it carries over to other parts of your life."

The reasons girls stray from chess are many, Haring said. For those who learn to play as youngsters, they may leave because the activity is male-dominated and not considered cool, she said. When girls go to tournaments and meet-ups, they have no one to talk to and no one they feel a connection with, she said.

"If we could make chess a cool thing for girls to do … we could also solve the problem of why we don't have more female engineers, or more females in math and sciences," Haring said. "It's something we have to address so that girls can have some role models — and that's what this type of tournament will create."

Sometimes girls simply shy away from chess because it pits them one-on-one against boys, whose attention and favor they are trying to capture, said Robert McLellan, the executive producer of "Brooklyn Castle," a documentary about one school's immersion in the sport.

"Girls are taught early not to beat boys," he said. "They will sometimes throw games and lose on purpose. Men don't view (competition) the same way."

Shayna Provine was 9 when her dad bought a chess board. After a few games with her father, she got the swing of it.

"At first, I lost a few times," she said. "But after a few games I started beating him pretty easily. That was fun. It was nice to know I was good at something and could beat my dad at it."

Since there was no chess club at her school, Shayna's dad hired a tutor to work more intensively with her. Now, the 12-year-old from Naperville studies books and puzzles on the game and practices online.

"Sometimes it's hard because when you play against boys, they think it's going to be a real easy game," she said. "Some boys, when I start beating them, they get kind of angry and slam their pieces down, or hit the clock real hard. I just stay calm the whole time. I focus on the game and try to stay composed no matter what."

Not a month goes by that Elliana Faletsky, 14, of Highland Park, doesn't compete in a tournament.

"Before you play, you shake the opponent's hand good luck," she said. "I shake firmly so they know, I'm happy and I'm confident in myself."

Caeley, of Rogers Park, started learning chess in third grade and has been hooked since, according to her mother, Jenny Gaw.

"When she first joined the chess club, there were a lot of girls, but in middle school she became the only girl," Gaw said. "Until she made friends with boys it was hard for her. Now she has a lot of friends — but they're all boys."

Caeley is determined to change that dynamic. This year she started her high school's first chess club, and leaned on her girlfriends to join.

"They've turned out to be better than I thought," she said. "The girls bring more diversity. After the rounds, it's all socializing. … It's fun to finally have someone to talk to."